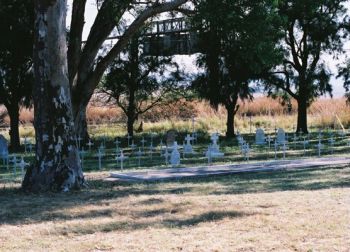 This is the site of No 4 Stationary Hospital. Many soldiers who were killed in action during the battles to relieve Ladysmith, or who died of disease, are buried here. The officers who are buried at Chieveley include Lieutenant Freddie Roberts VC, only son of Field Marshal Lord Roberts VC, who was killed during one of the attempts to save the guns of 14th and 66th Batteries RFA during the Battle of Colenso on the 15th December 1899.