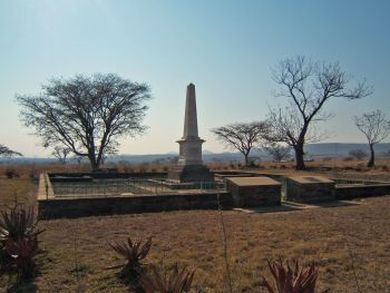 Following the killing of Piet Retief and his party at Mugundlovu on the 6th February 1838, King Dingane ordered his Amabutho (warriors) to attack the various Voortrekker encampments that were scattered about the Bushmans and Bloukrans River valleys.  Several parties were attacked on the night of the night / early morning of Sunday 17th February 1838. Altogether 41 men, 56 women, 185 children and approximately 250 coloured retainers were killed in this area.

Some time later, whatever remains could be located were buried where the Bloukrans monument now stands. Voortrekker leader Gerrit Maritz, who died on the 23rd September 1838 at his laager named Maritzdam, adjacent to Sooilaager, was subsequently reburied at Bloukrans.